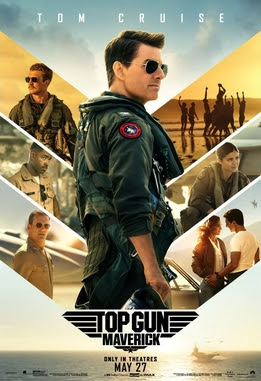 A global pandemic and nearly three years since I saw Tom Cruise on stage at Comic-Con in 2019, and 36 years since the original “Top Gun,” Cruise's (“Mission Impossible” series, "Edge of Tomorrow," "Jack Reacher") return to the danger zone will take your breath away.  The last movie star of his kind, Cruise remains in cruise control of epic moviemaking.  Returning to work with director Joseph Kosinski (“Oblivion,” "Tron: Legacy"), and high on youthful charisma, endless energy and extraordinary dedication to his craft, “Top Gun: Maverick” is truly a Cruise movie and Maverick's journey.

More than three decades of service in the Navy, Pete 'Maverick' Mitchell has been stuck in a Captain mode, where he should have reached the rank of Admiral.  Despite of a long and distinguished career, it seems that Maverick has been escaping promotions by wanting to stay in the skies, where the prime actions are, and his boundary-busting behavior continues to stymie and dismay his superiors.  Now an avant-garde test pilot, the opening scene of him flying an experimental flight must be seen to be believed.  Another is a single most heartstopping solo sequence mid-movie; you'll know when you see it.

At the request of Tom 'Iceman' Kazansky (Val Kilmer), Maverick is sent back to the flight school in San Diego, the same school he was trained in, to teach the next generation of fighter pilots.  They are preparing for a deadly mission into a mountainous terrain in enemy territory no living pilot has ever attempted.  It would not only require incredible technical skills and techniques, but also extreme level of fitness and physical endurance, impeccable timing and precision, unparalleled teamwork, peak confidence and a little bit of luck.

While the two men differ much in temperaments and Iceman's career has had a legendary trajectory, it's apparent there's a lifetime of friendship and admiration between him and Maverick.  Val's return, in a real-life state that the actor is in due to his health condition, while very brief, is impactful.  The reunion between the former star rivals is misty-eyed touching.

While Maverick's need for speed makes him the barrier-breaking pilot he's known for, a different side of him emerges.  He is wistful, reflecting on his younger years, and still carrying the guilt over his late co-pilot and best friend Nick “Goose” Bradshaw all those years ago.  He's also more careful, knowing full well that not only he has the lives of those young pilots on his hands, but also the life of aviator Bradley “Rooster” Bradshaw (Miles Teller, “Insurgent”), Goose's son.  Rooster is resentful and doesn't trust Maverick, whom he held responsible for his father's death and more.

Jennifer Connelly (“Winter's Tale”) is introduced as Maverick's on-and-off again flame, Penny Benjamin, the Admiral's daughter mentioned in passing in the original movie.  Successful and adventurous in her own right, she anchors and pushes Maverick the right way.  There's familiarity, comfort, old lovin' feelin' and tenderness between them.

The emotional core of the story is the relationship dynamic between Maverick and Goose though; as expected, it's uneasy.  I wish we'd get to know more about the new pilots, but I knew there's no time.  The real stars of the movie are the fighter jets and the elite pilots who fly them.

The aerial maneuvers and old-fashioned dogfights are a dazzling extravaganza across the wide open skies and seas, narrow canyons and snowy mountains.  These fighter jets steeply climb, dive, loop, roll, cut through, swerve and invert, taking along the actors for the fiery and glorious rides.  No CGI planes or fake cockpits here; the actors, who underwent a grueling survival training program, sat in the backseats flown by real Navy pilots demonstrating inhuman feats.  Their gravity-defying reactions pulling G-forces are also real, which makes the experience viscerally authentic with intensity.

Watching the movie in a spacious Screen X theater mid-day on a weekday without crowd, the wraparound screens are especially immersive (see it on Screen X if possible!).  The last stretch of the movie is phenomenally exhilarating.  Surmounted by racing tension, the turn of events turns emotional, but when you'd think the movie might be flying one way and ends with a headwind, it spins into another direction and another.

It's nice to see my adopted hometown, San Diego and its sun-drenched coastlines, featured on the silver screen.  The iconic anthem, familiar “Top Gun” tune will elevate and bring back memories, and Lady Gaga's (“ A Star is Born”) “Hold My Hand” new soundtrack fits with the movie's theme. 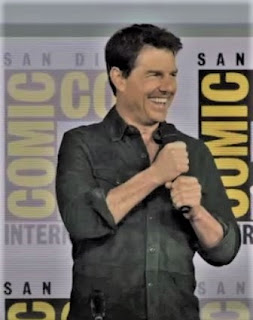 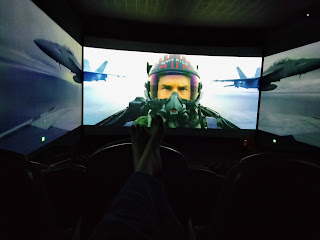