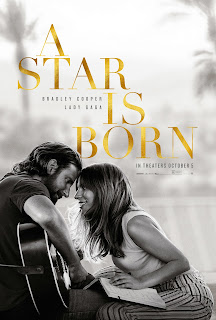 Grizzled country rock star Jack (Cooper) stumbles drunk into a bar and discovers an aspiring artist, Ally (Gaga), belting out a classic tune.  The two connect on the spot and at one point end up in a parking lot of a grocery store, learning a bit about each other and start singing in the quiet of the night.

For all his success, Jack is a drug addict and alcoholic, growing up with a damaged childhood.  Ally is a waitress and singer-songwriter, hiding herself behind self-doubt on the music front, insecure about her looks and abilities.  Beyond talent, showbiz is also about persona and what people want to see.  The glitzy dress, daring hair and bold makeup, blaring lights and choreographed dancers.

Smitten by Ally, Jack rolls out the red carpet by flying her to his concert and providing her with a backstage pass.  When Jack sees Ally, he compels her to join him for a duet.  Mousey Ally surprises herself and everyone when she sings her heart out on stage.  In this age of social media, her performance goes viral.  Soon she's scooped up by a producer, gets jazzed up and becomes a sensation.

While Ally's star is soaring, Jack's spiraling downward.  Even so, their emotional, co-dependent relationship keeps them together through the highest and lowest times.  Ally makes excuses for him, cares for but desperately wants him to clean up his messes, and eventually realizes even her love can't save him from himself.

Gaga and Cooper have authentic screen presence.  Gaga for appearing in such a non-Gaga like image and acting so wholeheartedly.  She's totally unassuming with her natural look and vulnerability.  Cooper for singing with his own voice in a rock star facade.  Also, as the film director, he directs the movie with taut frames, creating closeup portraits of Jack and Ally's relationship.  A quibble is Ally's transformation from good ol' Ally to worldly performer goes in a flash, but it doesn't lessen the heartfelt performance.  Both Gaga and Cooper are a revelation.

In “A Star Is Born," two stars and love songs shine.