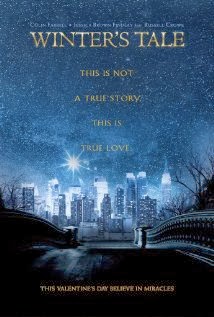 Colin Farrell (Peter Lake) and Jessica Brown Findlay (Beverly Penn) sell a fated tale of star-crossed lovers in the 19thcentury. A dying heiress falling in love with a thief trying to rob her family's mansion and on the run from his master. After her death, the story leaps to 2014 where amnesiac Peter runs into a sick child and her mom (Jennifer Connelly) and bonds with them. But the most sentimental moment happens when someone from his past appears and validates his existence.

Directed by Akiva Goldsman, "Winter's Tale" is marketed as a fantasy romance that endures through a century, touching themes like miracle, fate, destiny mixed with mythical white  light, time-travel and reincarnation, against the backdrop of a wondrous wintry wonderland.

If you're drawn to the film based on the romantic trailer and A-listers (Farrell, Connelly, Russell Crowe, Eva Marie Saint), know that the movie is something else. Sure, the love story is there, but it's not the core of the story. It's good versus evil – with a flying guardian horse, satan and demon in tow – and fulfilling one's life purpose.

While it's a noble theme, the demon (Crowe) becomes a central character (not to mention unnecessary appearance of an unintentionally laughable Lucifer) and the connections between Peter and present-day characters are not adequately established for us to care. The film would have been much better off sticking with an eternal love story or having the protagonist fulfill his future destiny that is connected to his past.

“Winter's Tale” feels distant and disconnected. It should have been magical.