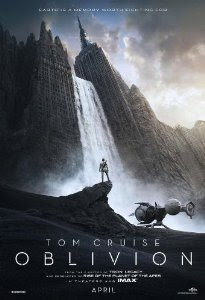 "Earth is a memory worth fighting for.”

“Oblivion” centers on a drone technician, Jack Harper (Tom Cruise, “Mission Impossible III: Ghost Protocol), who flies a Bubble Ship (a hybrid of a fighter spaceship and helicopter) and is tasked to fix downed drones on earth in 2077.  He lives in a sleek dig high above the clouds together with his partner, Victoria (Andrea Riseborough), who also serves as his communication officer.  She monitors his safety from their base in space and dutifully reports to their superior, Sally (Melissa Leo) through a sophisticated system.  Before embarking on their five-year service, Jack and Victoria had their memories wiped to maintain the security of their mission.

60 years ago, earth was invaded by aliens, called 'scavs' (scavengers).  The scavs shattered the moon, and without the moon, the earth destablized, resulting in earthquakes and tsunamis that destroyed half of the planet.  Humans launched nukes to stave off the scavs and eventually won the war.  However, the earth became mostly inhabitable and the surviving humans moved to Titan, one of the moons of the Saturn ring.  The drones are used to man fusion reactors that drain seawater and convert into energy.  They also patrol the earth's surface to shoot down any remaining scavs.

Jack and Victoria are nearing the end of their mission; in two weeks, they will conclude their service and join the rest of the humans in Titan.  While Victoria is looking forward to it, Jack has doubts and oddly feels that earth would always be his home.  He's traveled far and wide and found unspoiled swaths on earth, including a remote cabin by the lake, a calming oasis.  His uncertainty is confounded by recurring dreams of a woman (Olga Kurylenko) and flashes of life in New York, which strangely feels like a memory of a past than a fantasy.

When a spaceship crash lands on earth, Jack finds that it's filled with several pods of humans in hyper-sleep state.  And inside one of the pods, is the woman in his dreams, who later wakes up and mentions that her name is Julia.  Jack and Julia are discovered and captured by a group of rebels (led by Morgan Freeman and Nikolaj Coster-Waldau), human survivors.  The events that transpire, followed with fierce flying and firefights, make Jack realize that his life is not what it seems to be and that he's not what he thinks he is.  He may just unknowingly holds the fate of mankind on his hands.

Director Joseph Kosinski (“Tron Legacy”) executes his vision with excellence.  Cruise plays his part with sincerity, connects with both of his leading ladies and the higher mission he's entrusted with.  With a straightforward story and humanity, “Oblivion” is captivating from the start.  Part of the appeal is the mystery, which unfurls easily piece by piece and takes us along through each discovery and ultimate truth.  A bigger appeal is the phenomenal visual, reminiscent of last year's “Prometheus,” elevated by an electronica beat, along the same vein of "Tron Legacy" and “Hanna.”  Oscar-winning cinematographer Claudio Miranda (“Life of Pi”) creates a vast and elegant canvas.  Desolate, barren wasteland dotted with ruined monuments in stark contrast with deep gorges and verdant mountains.  The sterile white of the glassy homebase and pool in space with the homey, lakeside wood cabin on earth.

A cool sci-fi with a heart, “Oblivion” is satisfyingly entertaining. 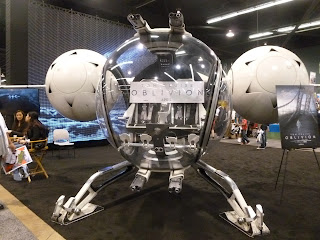 Posted by The MovieMaven at 7:32 PM