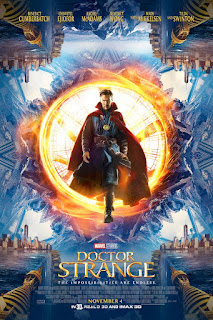 This year's Marvel's supremacy streak doesn't end with "Captain America: Civil War."  It's got trick up its sleeves with "Doctor Strange," an origin story venturing into a whole other universe.

Dr.  Stephen Strange (Benedict Cumberbatch, "The Imitation Game") is a brilliant  neurosurgeon. Self-centered and an all-around jerk, he doesn't have any qualms about rejecting medical cases that do not earn him fame or treating people with neglect and disrespect, including his colleague and former flame, Christine Palmer (Rachel McAdams; "Spotlight," "Sherlock Holmes").

The haughty doctor's glorious career ends when he suffers nerve damage on his hands from a car wreck.  Luckily, when Western treatments fail him, he finds a former paraplegic, Jonathan Pangborn (Benjamin Bratt), who is miraculously up and running again.  Pressed for answers, the man reveals his secret.  He took a trip to Kamar-Taj, Nepal, where he claimed he learned spiritual knowledge to elevate his mind and deepen his spirit, which ultimately healed his body.

It's a rough start for Dr. Strange in Kathmandu, a starting point to get to Kamar-Taj.  Upon encountering a mysterious warrior, Mordo (Chiwetel Eljofor), he discovers the existence of the Ancient One (Tilda Swinton, "Hail, Caesar!"), the guru of mystical and martial arts, along with her pupils.

A man of science, Dr.  Strange was initially dismissive of the Ancient One's esoteric principles.  He quickly changes his mind after experiencing an out-of-body experience into an astral plane and infinite multiverse.

Earth is just one of the never-ending dimensions.  And as it turns out, its survival is under the threats of otherworldly forces, partly in the form of a former student of the sorceress supreme, Kaecilius (Mads Mikkelsen), and his acolytes.  The Avengers may have saved the world, but the world needs more than its grounded superheroes.

While Dr. Strange's transformative journey may have felt too rapid, Cumberbatch credibly carries a regal air and mystical power with his presence, in his olden costume and sentient cloak.  The cloak, Cloak of Levitation, is a relic that has chosen him to be the wearer, which leads to some interesting scenes.  Dr. Strange magically transforms from a beginner into a master sorcerer; from forming a glowing weapon with his disfigured hands to floating from one dimension portal to another, casting spells and manipulating energy, space and time.

Kaecilius' motive for doing what he does is surprisingly not a typical power grab.  Backed into a corner, Dr. Strange violates the natural law of time in order to gain the upper hand and selflessly preserve humanity.  Everything is not in the clear, however.  A character insinuates a price that humans may have to pay in the future.  There's an inherent order of things, including life and death, and they balance humanity.

It's a visually impressive spectacle.  Reminiscent of Christopher Nolan's "Inception," skyscrapers, walls and floors are twisting, turning, shifting, shaping, folding and collapsing.  Ruins rebuilt.  The parallel realms  are a kaleidoscope of colors, fire, light and darkness.

Stay tuned for the post credits.  The first is a delight, pretty much securing a place for Dr. Strange to meet the Avengers.  The second one gives a glimpse of Doctor Strange's real adversary in the to-be-scheduled next installment.

Blending fantasy and magic with the tried-and-true Marvel's formula of superhero action and humor, "Doctor Strange" is a fresh, entrancing entrance into the ever-expanding Marvel Cinematic Universe.