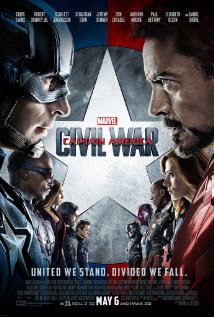 "United we stand, divided we fall."

"Batman v. Superman: Dawn of Justice" delivers the first war of superheroes this year, but "Captain America: Civil War" is a league of its own.

The title, 'Civil War,' maybe sounds a bit dramatic, but the reality is the Avengers are deeply divided and they fight tooth and nail to do what they believe is right. They remain the good guys, the same heroes who band together and save the world time and time again.

Saving the world, however, is a serious business and people do get killed when superpowers clash. Collateral damage is easier to swallow when it's just materials, but not when it involves lives.  People who lost loved ones in the crossfire.  And this reality could no longer be swept under the savior rug.

After the vast incidents in New York ("The Avengers"), Washington, DC ("Captain America: Winter Soldier") and Sokovia ("Avengers: Age of Ultron"), and the mission in Lagos that claims fatalities, as seen in the opening scenes here, countries unite under the United Nations umbrella and demand oversight over the Avengers.

The Sokovia Accords, or the Superhero Registration Act, requires the Avengers to sign the agreement and abide by the law.  Essentially, they could only act on missions that are sanctioned by the U.N., with strict respect to sovereignty and safety.

Tony Stark/Iron Man (Robert Downey Jr., "The Judge"), weary and ridden with guilt from his Ultron creation, is all for it.  His character has evolved so far from his self-importance stance, "I privatize world peace" in the first Iron Man movies.

Lt. James Rhodes/War Machine (Don Cheadle) stands by Tony's side.  Vision (Paul Bettany, "Transcendence"), shares Tony's vision of accountable safeguards, and comes to his aide.  Natasha Romanoff/Black Widow (Scarlett Johansson, "Her") comes around, although it's not black-or-white with her.  Eventually, new recruits T'Challa/Black Panther (Chadwick Boseman) and Peter Parker/Spider-Man (Tom Holland, "The Impossible") round up the Iron Man Team.

Steve Rogers/Captain America ("Captain America: The First Avenger") weighs in the options but ultimately declines.  He firmly believes that, as imperfect as they are, the world is still a safer place at the Avengers' own hands, who can move at a moment's notice and take independent actions as necessary.

Steve is not the same, trusting man from 'The First Avenger.'  The faithful soldier who followed  rules and made his country proud.  That was before Hydra's infiltration of government bodies and before his childhood friend, Bucky Barnes/the Winter Soldier (Sebastian Stan), was mind-controlled by the corrupt authority and became a killing machine for decades.

In the background, a villain, Zemo (Daniel Bruhl, "Rush"), takes advantage of the highly charged political climate and manages to put Bucky back in public view, framing him for an explosive event.  This divides the Avengers even further.   Meanwhile, Steve remains steadfast in his belief about his friend and wants to clear his name, even if he has to operate outside of the law.  Tony, on the other side, is tasked to detain and bring him in.

There's a sense of joy watching these superheroes come to a head in the airfield.  Not that you're happy to see them trying to knock one another out, but you can easily tell that deep down they are friends.  It shines through in their demonstration of powers and banters.  While there are no surprises in the staple lead characters, the newcomers bring in a novel element into the scene.

Black Panther carries a regal presence and grace.  Ant-Man and Spider-Man are delightful in their antics.  In a movie stuffed with so many superheroes, Marvel manages to create a mini-arc for Black Panther and a cheery introduction to Spider-Man.  Spider-Man, seen here as a wet-behind-the ears teenager, is a refreshing contrast with his mature counterparts.

But the battle doesn't end there.  An intense fight between the lead superheroes, Iron Man and Captain America, is saved for last.  With world affairs filled with conundrum and calamity, the Avengers have been at a moral crossroad and battlefield, but this duel is due to deeply personal reasons.  An emotional twist is revealed and it's the highlight of the movie.

Free will versus authority.  Longstanding friendships are tested.  Alliances are broken.  And fracas among friends is not without sacrifice.  Who determines what's right or wrong anyway, when it comes to saving the world?

Once again directed by the Russo brothers, "Captain America: Civil War" presents a more complex conflict than the typical good versus evil.  And when all is said and done, there's no clear-cut conclusion.

It's a marvel to think that it's been eight years since we're first introduced to the Marvel Cinematic Universe with the premiere of Iron Man.  Nearly a dozen movies later, and with 'Civil War' concluding Phase 2 of the grand plan, there are still more stories to tell.

Fractured, the Avengers will have to unite somehow in the final installments, "The Avengers: Infinity War."  Part I will come out in 2018 and II in 2019.

Posted by The MovieMaven at 6:54 PM