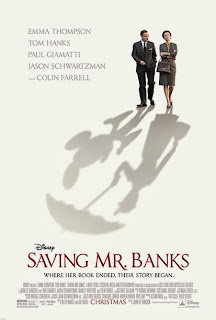 [Note: from 12/11/13 press screening.  Look forward to catching up on the rest of the great movies after the holidays.  Happy Holidays!)

There's a story behind every film.  Who knew the makings of “Mary Poppins” was such a long rollercoaster ride?

Director John Lee Hancock plays out the rough-and-tumble ride in "Saving Mr. Banks."  For 20 years, author P.L. Travers (Emma Thompson) has rebuffed Walt Disney's (Tom Hanks, “Captain Phillips”) efforts to make her beloved novel into a movie.  Her agent finally gets through to her when financial situation becomes tough.  Still, in one condition.  Travers would have the final say on the adaptation.

Travers begrudgingly makes her Transatlantic flight from England to Los Angeles.  A biting exchange on the plane with a flight attendant and a fellow passenger with a child, an offhanded quip after landing at the airport and meeting her driver (Paul Giamatti, "The Ides of March"), and her unpleasant reaction to the cheerily decorated hotel room, tell you a lot about Travers.  Although the scenes come across as humorous, it's clear that Disney would be in for a wild ride.  Travers has a certain level of disdain for all-things Disney, which she views solely as a moneymaking empire.

Travers subsequently drives screenwriter (Bradley Whitford) and music composers (B.J. Novak and Jasson Schwartzman) crazy.  She insists on recording every session and proceeds to nitpick every single detail of the way the characters are portrayed, lyrics of music, colors of the set designs or costumes.  No animation.  Dancing or prancing around is out of the question.  Songs are not an option.  For his part, Disney promises that he would not tarnish the characters or the story.  Bringing “Mary Poppins” into the silver screen is a promise that the entertainment maven made to his daughters two decades ago, and as a father, he would do just about anything to fulfill it.

As the present story unfolds, the film flashes back into Travers' childhood (played by Annie Rose Buckley) in the Australian outback.  It reveals a close, sweet relationship with her loving father (Colin Farrell, “Total Recall”), as wasted as he is with booze as a constant companion.  Her mother (Ruth Wilson), is depressed, and tries hard to keep the family together, later with the assistance of her aunt (Rachel Griffiths).  There are heart-wrenching events that no child should experience.  Internal strength takes over carefree spirit.

The continuous flashback-and-forward can become a little distracting and take you out of the intensity of some moments, but the backstory helps a lot in understanding this hard-shell of a woman.  Truth be told, there are emotional moments in her past that are more engrossing than her present.  Credits go to Farrell and Buckley who carry the scenes tenderly.

Hanks certainly bring the American friendliness and twinkly charm of amiable, 'Uncle Walt.'  But Thompson impresses the most.  This is essentially Travers' story.  She carries this air of uptight, British upper-crust, hitting every cranky and cantankerous notes, but also joyous and poignant ones.  The supporting players playfully round up this family-friendly production, including script-and-song writing.  Music plays a prominent role and it's apropos.

Eventually Disney realizes that even all the courting yield no result.  The characters in “Mary Poppins” are dear and personal to Travers; they're like a family.  The message of the story is not about a lady with a flying umbrella swooping in to save the kids.  During a heartfelt conversation, Disney shares a a childhood story.  He relates to and sees where Travers is coming from.  The moment that he 'gets it' and his unwavering commitment that finally compels her to willingly hand over the rights.

The moral of the story rings true.  Don't let the past dictate the present.  If life disappoints, move forward.  Life is meant to be lived, with new memories.

Absorbing and affecting, “Saving Mr. Banks” is a wonderful film for the ages.

Posted by The MovieMaven at 9:21 PM