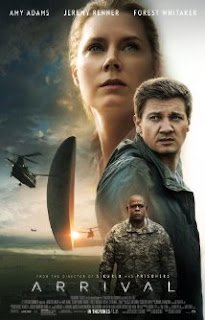 "Arrival" arrives in theaters as an alien kind of movie, but the Denis Villeneuve-directed sci-fi is anything but.  For sure, it's got aliens.  But other than their presence, it's not about them... It's really a story about us.

The first visual of the spaceship is quietly striking.  Shaped like half of an egg, a massive monolith comes to view, hovering low above the plain field of Montana, surrounded by fogs.  Suited up in hazmat suits, the crew climbs up an entry point at the base of the shell, gets propelled by gravity, eerily inching closer to the glass panel that separates the creatures from the humans.  The aura is foreboding.

The octopus-like creatures, often shrouded in haze, are later called heptapod and they communicate through a series of circular inkblots.  While government officials demand answers - who  they are who they are, what they are doing, what their purpose on earth is - there's no shortcut to get there.  It's mostly up to Louise to first initiate contact in a way that hopefully is universal to interpret and decipher the rest of the swirly symbols.

To make matters urgent, average Americans and other countries have grown restless.  What started as a collaboration among nations, primarily data-sharing, has evolved into widespread fear and unrest, particularly after something gets lost in translation.  Communication breaks down.  A herd mentality follows and global war is now impending.  The foreign language lesson method is deemed too slow.  Governments want the extraterrestrial objects blown out of the skies.

These scenes are intertwined with Louise having vivid images in her head during the day and in her dreams.  Memories of the past, visions of the future.  Fragments of her tender relationship with her daughter; her birth, childhood and death.  Adams' emotive performance shows in Louise's softness and steely resolve, realization and acceptance of what is.  Her life may not be what you think it is.

Language is the basis of civilization.  It's how we understand and communicate with the world around us.  And therefore, our brain is wired to comprehend certain elements of life in definite ways, such as the notion of time.  However, since we may not be alone in this universe, our understanding may not necessarily be-all and end-all.

You could even extrapolate the message that it would behoove us to keep an open mind, observe, listen, learn to seek meaning and understanding, including a principle or practice that may differ from our normal perception, and do our best to communicate with one another.

The ingenuity of the film lies in the overarching premise, pieces that come in the form of the past, present and future that connect a life story to the overall theme, and without your realizing that you've been offered smattering clues about what is transpiring. You're riding this journey with Louise and you'll be awakened along with her towards the denouement.

An enlightening tale about the human mind, communication and perception, "Arrival" is thoughtful and thought-provoking.