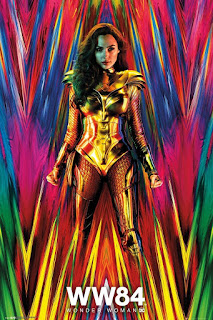 In a year where essential workers make heroic sacrifices every day, fantasy superheroes may seem silly, but “Wonder Woman 1984” maybe just what we need.

The movie opens in the idyllic island of Themyscira with some sort of Amazonian Olympics.  A young Diana Prince, astoundingly portrayed by Lilly Aspell, participates in the grueling competition with the best of them; running, climbing, self-balancing, sliding, leaping, swimming in the ocean, shooting arrows and riding in the mountainous jungle.  The first to make it back to the gladiator-like arena and shoot the final arrow first will win.

While Diana can perform the acrobatic moves and endurance challenges superbly, this is where she learns the lessons of honesty and truth, “No true hero is born of lies.”  Little did she know that this formative experience will vastly influence her life later on and save the world.  This sequestered sequence, with marvelous landscapes and impressive feats, are memorably breathtaking that I hope a spinoff will be made about these Amazonian warriors. The end-credit scene also justifies that there's more to tell about the Amazonians' lives.

Fast forward from the World War I era of “Wonder Woman,” the movie is set in the 1984.  The 1980s lends itself to a rad nostalgia, brassy and colorful.  Wonder Woman's first major act here smoothly captures a jeweler's armed robbers and save a couple of little girls with a nod and a wink.  It turns out that the jewelry store is a front for a back room where stolen jewels and artifacts from all the world are stored.

Nerdy and insecure, Barbara is regularly overlooked, disregarded, dished about and harassed, and thus she wishes to be like Diana, with her effortless elegance and cool confidence.  Diana though, even with all her power and beauty, can't seem to forget her first love from all those years ago, fighter pilot Steve Trevor (Chris Pine, “Unstoppable,” “Jack Ryan: Shadow Recruit”).

One of the artifacts that arrives in the museum and under Barbara's care is a certain stone.  It's shortly revealed that the ancient artifact has a mystical power.  Barbara gradually transforms from a meek-mannered wallflower into a head-turner, hardened challenger and furry apex predator.  Her vengeful transfiguration, while drastic, is believable.  Steve's return touches Diana deeply.  While there may be some ethical implications about the way he returns, digging deeper here doesn’t fit into the lighthearted mode of the movie.

Steve’s fish-out-of-water scenes, encountering modern appliances, style and technology are delightful, a reversal of Diana's foray into the human world in the first installment.  There's a romantic moonlit stroll against the backdrop of the Washington Monument and a nighttime airplane ride through and above fireworks-lit skies.  A surprising appearance in this ride adds a thrilling touch.

Barbara becomes entangled with Maxwell Lord (Pedro Pascal), a garish infomercial talking head and phony businessman turned into maniacal oil tycoon.  His only saving grace is his love for his son.  Maxwell makes a large investment in the museum in order to gain access to the magical stone.  He gets his hands on it, and as it can be predicted, it doesn't bode well for mankind.  Maxwell's descend into madness fits into the gaudy period and comical flair of the movie.

The story drags on and gets muddled in the middle where Maxwell's ambition leads him to Cairo, leading Diana and Steve on an intense chase with trucks and armored tanks on a desert road.  A particular standout involves a flying missile and a golden lasso.

The visual effects are excellent and score triumphant.  Like "Man of Steel," it benefits from Hans Zimmer's iconic touch.  Director Patty Jenkins was right; this movie deserves to be seen in the biggest theater screen and I could only imagine what a cinematic event it would have been.

Without a sword and shield, the lasso is used creatively in this movie, not just for lassoing people and objects, but also the aforementioned missile, power lines and lightning.  It's wondrous to see Wonder Woman gracefully soaring and flying through the skies, feeling in the wind and the air.  The final fight between golden-winged and armored Wonder Woman and Cheetah is balletic and fierce.

Gadot continues to be embody Wonder Woman's essence of nobility and humanity.  Despite her Goddess-like strength, her vulnerabilities are palpable in her moments with Steve and sprinting through the street with a heartbreaking resolve.  A major plus about the villains on this movie is that both Cheetah and Maxwell are very human.  Unlike Ares or computer-generated figures, they have flaws that are relatable.  After massive, Avengers-style battles that permeate superhero movies these days, it’s also refreshing to see an intimate scale of combat and how a superhero can disarm the enemy differently.  The latter is the heart of Wonder Woman.

“Wonder Woman 1984” offers both escapism and virtue lessons that resonate and uplift during this unprecedented time.  There's not one of us that wouldn't wish the world to be different. Humans, however, with all our characteristics, impulses and desires are not perfect beings, and thus our wishes reflect those.  It’s perilous to have attachments to something or someone, versus striving for values or ideals.

Life is full of challenges and we should acknowledge reality.  While we may not always have what we want, we can always hope and strive to be better.  Love, compassion, acceptance, truth and courage to do the right thing (no matter how hard) can help heal broken souls and light the world around us.  What we believe, say and do make a difference.

The right movie at the right time, “Wonder Woman 1984” is Wonder Woman-personified.