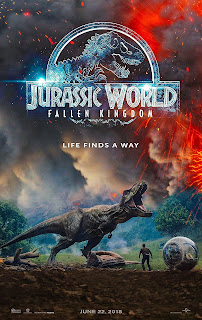 “Jurassic World: Fallen Kingdom” picks up three years after “Jurassic World.”  The fantasy-filled theme park is no more and dinosaurs are roaming in the wild as nature intended.  There's only one problem; Isla Nublar's dormant volcano is going to erupt.  Without human intervention, all the dinosaurs will soon cease to exist (again).

Here comes the moral dilemma.  Do these previously extinct prehistoric animals, revived by a private enterprise, deserve protection of the U.S. Government and at the expense of taxpayers like other endangered species?

The plan is to rescue these animals by moving them into an island sanctuary nearby.  As the former operations manager of the park, Claire's expertise is needed to get into the old park's system and locate the dinosaurs.  She persuades her ex-boyfriend and raptor trainer, Owen Grady (Chris Pratt, “Avengers: Infinity War”) to go with her and her team, tech geek Franklin Webb (Justice Smith) and paleo-veterinarian Zia Rodriguez (Daniella Pineda).

It's no surprise that things do not go according to plan.  As a matter of fact, the plan is not what it seems.  Mercenaries and profiteers (Rafe Spall, Ted Levine, Toby Jones, B.D. Wong) want to save the dinosaurs for their own self-serving benefits.  These dinosaurs are worth millions and can be used for other purposes.

Director J.A. Bayona sets up suspenseful set pieces and action sequences from the start.  Unlike the sun-lit wonder of “Jurassic World,” 'Fallen Kingdom' starts off with a harrowing underwater nighttime expedition in the rain. Once Claire and company arrive at the island, they are trapped in an underground bunker, cracking with shots of hot lava and a monstrous creature coming out of hiding.   Then out in the open, dinosaurs are running amok, trying to outrun shooting fire balls and engulfing smoke.  Chaos descends on land and in the ocean, with a rolling and sinking gyrosphere.

Once the dinosaurs are off the island, they are transported into the mainland, specifically an expansive estate in Northern California, the Lockwood Estate.  Caught in the mayhem is Maisie Lockwood (Isabella Sermon), Benjamin's granddaughter.  Terror reigns in the manor.  Hide-and-seek and attack occur in confined spaces, lending a claustrophobic feel.  The filmmaker takes advantage of the Gothic setting with a play of light and shadow.

The film is shot beautifully for maximum chill.  A lone, gentle giant left behind on the shore, disappearing into a desperate silhouette in an ash cloud.  A ferocious hybrid creature roaring on the rooftop against the backdrop of a moonlit rainstorm.  A gigantic beast lurking beneath the sea surface dotted with surfers.  An intelligent dino roaming across rocky scape and looming steps away from civilization.

The kingdom may have fallen apart, but life finds a way.  There's also a twist that doesn't stop with loose dinosaurs.  The ending sets up for a sequel where humans would have no choice but face the consequences of their action. “Jurassic World: Fallen Kingdom” is a tense and thrilling ride with a surprisingly thought-provoking message.