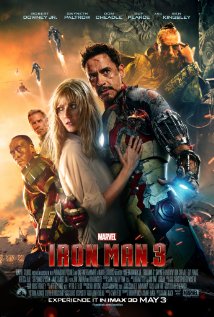 "Big man in a suit of armor. Take that away and what are you?" (Captain America to Tony Stark in "TheAvengers")


Directed by Shane Black (taking over from Jon Favreau), "Iron Man 3" picks up after the events of "The Avengers" and readily answers the question.  It turns out, even without the suit, he's everything.  Here Tony Stark (Robert Downey Jr.) is shown as a character more than his alter-ego, Iron Man.  The existence of alternate dimension and alien invasion in New York City has triggered nightmares and panic attacks and shows Tony's vulnerability as human, "a man in a can."  He's not some God, supersoldier or hulking giant.  He buries himself in his work, experimenting with a prototype suit that could fly off and attach itself to Tony's body on command, and working on other inventions as well.  This has affected his relationship with Pepper Potts (Gwyneth Paltrow, "Iron Man," "Iron Man 2").  At the same time, Black manages to keep things on the lighter side, as an "Iron Man" movie should be.


When a terrorist bedecked in an elaborate getup, the Mandarin (Ben Kingsley), recruits followers around the world and terrorizes the country, Tony issues a challenge to come and get him.  What follows is a massive destruction of his hillside mansion.  The helicopter strike is one of the few awesome action set pieces in the movie.


The story then rewinds to 1999, where Tony spent New Year's Eve with his squeeze, scientist Maya Hansen (Rebecca Hall, "The Town"), and stood up an appointment with another scientist, Aldrich Killian (Guy Pearce, "The King's Speech").  In present day, Killian has now developed the ability to recode the human brain's DNA and created superhumans with ability to self-heal and melt metals, although not without hiccup, such as overheating and combustion.


Tony soon has his hands full.  With his home in rubbles, out of his powered suit and stranded in middle America, hunted down by Killian's agents, head bodyguard Happy Hogan in a coma (cameo by Jon Favreau), best friend Colonel Rhodes (Don Cheadle, "Iron Man 2") held hostage, and both the President of the United States (William Sadler) and beloved Pepper in danger,  he enlists an unlikely ally, a smart boy (Ty Simpkins), and he must rely on his intellect, ingenuity, wit and resourcefulness to improvise and survive, track down the enemy, save the country and the one he loves most.  A couple of action sequences, midair human chain-rescues of Air Force One passengers and grand face-off with an army of armored suits, are bold spectacles.  A surprising link between the Mandarin and Killian, and Peppper's role that seals the nemesis' fate are twists no one sees coming.


The story is more convoluted than the previous installments and it runs a bit slow in the middle, but it remains entertaining.  While the overall tone is less vivacious, the comedic moments are still laugh-out-loud funny.  The movie works for the most part thanks to Robert Downey, Jr.  Whilst this may or may not be the last standalone "Iron Man" movie for Downey, it's a very good thing that we have "The Avengers 2" to look forward to.


Downey truly makes the movie the worldwide success that it has become and launched Marvel to the next level with "The Avengers."  It's hands down the most impeccable casting in superheroes' history.  Downey IS Tony Stark.  Especially after seeing him in person more than once command the attention of over 6,000 people at Comic-Con, it's impossible to imagine another actor with the sheer presence, personality, style, talent and charisma fit for the larger-than-life character.  This movie is proof that, without Downey's Tony, Iron Man is simply a metal suit or a machine, which can be  remotely controlled, assembled, disassembled or destroyed.  The one thing irreplaceable is him.  The real Iron Man.  Maybe not a superhero, but certainly a hero.


"Iron Man 3" is a full blast of fun and action, a perfect lead to the 2013 summer blockbuster season. 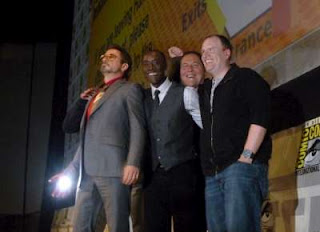 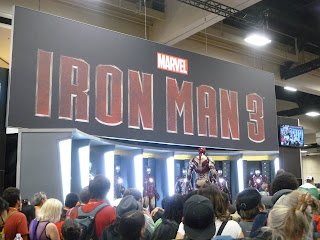 Posted by The MovieMaven at 7:22 PM