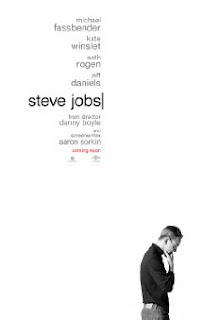 I wasn't particularly looking forward to seeing "Steve Jobs."  Notwithstanding that I wanted to catch a noteworthy film before it disappeared from local theaters, there was a sense of deja-vu, considering that "Jobs," just premiered a mere two years ago.  It was mediocre, but it had some high notes and I enjoyed it.

But having heard critical acclaims of "Steve Jobs" and personally admired Aaron Sorkin's screenplay on "The Social Network," I would make it to the theater sooner or later.  So glad I did.

"Musicians play the instruments.  I play the orchestra," said Steve Jobs (Michael Fassbender, "X-Men" series, "Prometheus") in response to a pointed question why he gets all the glory since he's not an engineer or designer, and that he takes all the credit for the brilliant and tireless work from the people who devote themselves to him.

Not an ordinary biopic, the Danny Boyle-directed "Steve Jobs" is uniquely structured like a play, a three-act play before three key product launches; Macintosh (1984), NeXT (1988) and iMac (1998).

Each act provides a fascinating insight into the iconic man behind the black turtleneck.  In the eyes of the world, we know who Steve Jobs is, Apple co-founder.  One-of-a-kind visionary.  Driven problem-solver.  Supremely creative thinker.  Marvelous marketer.  He's a legendary innovator with a keen eye for intuitive design and miniscule details, who showed people things they never imagined or knew they needed or wanted.

Behind the scene and within his inner circle, Steve Jobs is a mercurial figure.  Self-aggrandizing, antagonizing, calculating and condescending control freak.  It is an ironic realization to see how a man with an innate ability to visualize and understand how people think and want are not able to connect with the people closest to him.  A paradox, Steve Jobs is out-of-the-box thinker, yet out-of-touch with human connection.

The backstage drama is a cacophony filled with farcical facades about product features, room preparations, and intense confrontations about relationships where each act ends with a phenomenal, cult-like mania when the man of the hour seizes the stage.

It could feel a little repetitive, but the rapid-fire dialogue, razor-sharp script, deft direction and fast-paced editing will keep you fixated onto the screen.  The stakes are elevated and emotions are running at a fever pitch.

Certain scenes are crisscrossed between present happenings and flashbacks, paralleling the heightened situations. The cinematography is distinguished; each act shot differently, ranging from painterly in the initial act to pristine in the final one, with attention to lighting, composition and reflection.

The key players power the movie with electrifying performances through those intense confrontations.  His former girlfriend and mother of his child, a woman who refuses to be silenced, Chrisann Brennan (Katherine Waterson); his daughter, Lisa (played at different ages by Perla Haney-Jardine, Ripley Sobo, Makenzie Moss) humanizing him, someone whom he denied paternity for years; Andy Hertzfeld (Michael Stuhlbarg, "Pawn Sacrifice"), a degraded key member of his early development team; John Sculley (Jeff Daniels), CEO of Apple, an experienced business executive lured from Pepsi, which turns into a father figure in some respect; Steve Wozniak (Seth Rogen, "Paul"), Apple co-founder and lifelong frenemy; and perhaps most prominently, Joanna Hoffman (Kate Winslet, "The Divergent " series ), the head of marketing and long-suffering confidant and right-hand woman who stands by and stands up to Steve Jobs when the moments count.

Last but not the least, the man at the center of it all, Fassbender.  While he doesn't bear the physical resemblance to the real Steve Jobs (except toward the end), he captures the core of the controversial figure with bravura.

"Steve Jobs" is masterfully orchestrated like a spectacular theatrical play in a grand opera house, complete with orchestral music.  An amazing showmanship, it's one of the best films of the year.

Posted by The MovieMaven at 7:35 PM