"The Age of Adaline" 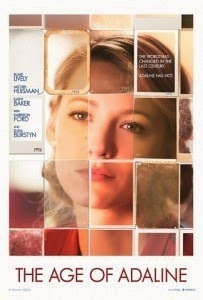 What if you could remain forever young? Would you want to live forever?

Adaline Bowen (Blake Lively, “Green Lantern,” “The Town”) looks like any other young woman, except that she's 107 years old. At age 29, she was in a car crash and practically died. Her car plunged into a river in a snowstorm, but due to a bizarre lightning phenomenon, her heart was revived. Not only she survived, it froze her in time and since that day she has never aged a day.

A widow with a small child, Adaline had managed through the earlier decades until she realized that she couldn't go on without arousing suspicions. After all, genetics, cosmetics, diets and exercises could only do so much. Reluctantly, she left her grown-up daughter, although they have remained in touch over the years. The mother-daughter bond remains, as clearly seen in her interaction with her now elderly daughter (Ellen Burstyn).

Adaline moves to a new place every decade and establishes a new identity. By and large, she never allows herself to be attached to anyone or anything, except her dog.

But life has other plans. Love strikes when she meets a princely philanthropist, Ellis Jones (Michiel Huisman) at New Year's Eve event. He ignites romance through their common passions for literature, history and adventure. Adaline ends up agreeing to meet his parents, William (Harrison Ford, "Ender's Game") and Kathy (Kathy Baker), for their 40th year anniversary celebration. William turns out to be a man with ties to her past and their exchange would change the course of her eternal life.

Lively is lovely. With praises to the costume designer and makeup artist, she's refined in style. She carries herself with an old-fashioned elegance and air of mystery. There's a saturnine tinge, as a soul who experiences a long life of solitude and sadness for not being able to live normally, getting close to anyone, or growing old with loved ones. But she also manages to appear natural when she feels affection or shares laughter.

Adaline is fascinating by nature and it's a shame that the filmmaker did not explore more about her experiences and develop her as a character. Instead, she looks like gliding from one scene to another and her life is shown like a montage with minimal milestones. The movie also chooses to use lengthy expository voice-overs to explain the supernatural occurrences, which would have been better off toned down, or having the consequence discovered or experienced first-hand.

Other films with similar theme, “Tuck Everlasting” and “The Curious Case of Benjamin Button,” and on television, “Forever” show (season 1 on ABC, currently playing), delve deeper. They make you think or question your perspectives about youth and aging, humanity and mortality, life and living.

“The Age of Adaline” is a plushly packaged and has its fantasy charms, but it could have been infinitely more impactful.