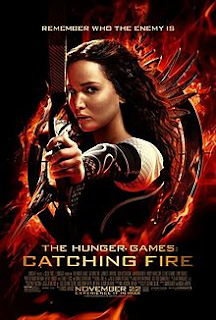 At the end of "The Hunger Games," I was hungry for more. Directed by Francis Lawrence, "The Hunger Games: Catching Fire” satisfies and yet leaves me wanting more.
Katniss Everdeen (Jennifer Lawrence, "Silver Lining Playbook"), along with her fellow tribute, Peeta Mellark (Josh Hutcherson), emerge as victors of the 74th Annual Hunger Games. But instead of returning to a rundown shack in the impoverished and oppressed District 12, they lead a privileged life in Victor's Village. The all-mighty and wealthy Capitol now provide for them. Katniss' mother (Paula Malcomson) and sister (Willow Shields) no longer have to starve or work like slaves to survive.

The winning comes at an unimaginable cost, however, the lives of all the other tributes from other districts. Katniss is riddled with nightmares and hallucinations. Peeta is as gloomy as ever. Having stood up to the totalitarian Capitol and broken the rules of the game by refusing to kill the other and choose to die, President Snow (Donald Sutherland, "The Mechanic") maliciously makes it clear to Katniss that they would embark on victory tours to each district as a gracious couple-in-love, saving the Capitol's face for letting them live. Never mind that Katniss and Peeta are still progressing toward friendship,and that Katniss still harbors feelings for Gale Hawthorne (Liam Hemsworth), her childhood friend. They have to give false speeches, lavishing praises on the Capitol, in front of the families of the fallen tributes. Otherwise, Katniss could count on her family, friends and district getting slaughtered. As proven from a deviation from the script of an initial speech, innocent lives are at stake.

President Snow is concerned that Katniss has become a symbol of defiance, igniting an uprising that would spark an all-out revolution. Fear is not enough as long as hope exists. With a suggestion from the new game-maker, Plutarch (Philip Seymour Hoffman), the Capitol changes the rules of the reaping day. The Capitol picks the tributes for the 75th Hunger Games, the Quarter Quell, from the pool of all past victors. This goes against the promise that victors would be guaranteed safety for the rest of their lives. As predicted, Katniss and Peeta have no choice but to be back in the deadly game. They're assisted by their booze-inclined, sympathetic mentor, Haymitch (Woody Harrelson, "Now You See Me"), wildly dressed-to-the-nines handler, Effie (Elizabeth Banks, "Man on a Ledge") who's grown attached to her tributes, and supportive stylist Cinna (Lenny Kravitz).

While there's familiarity with the pre-setup of the game – opening ceremony, practice and get-to-know-tributes, individual assessment and final presentation hosted by a clueless emcee, Caesar (Stanley Tucci, "Captain America: The First Avenger") – it's still heart-pounding to anticipate how this life-or-death game would play out in a rigged forest, perilous beach and spinning rock platform. The level of unpredictability, especially for those who have never read Suzanne Collins' novel, makes the viewing absorbingly tense.

Lawrence is on fire. She portrays Katniss, the girl with the bow-and-arrow and gorgeous flaming gown, with equal ferocity and vulnerability. Scared, conflicted and tortured, Katniss is also sharp, fierce and determined. Hutcherson is not only adequate here, but his Peeta has developed and shows the strength of his character. With Gale in the picture, Katniss' relationship with Peeta is a tricky one, born out of necessity to survive, but their bond grows with each passing moment.

The film doesn't mask the twisted or brutal nature of the story. What ominous obstacles the tributes would face, what kind of tragic destiny awaits them, how they would get axed, what strategies they would make, which allies they would associate themselves with (Sam Claflin, Jena Malone, Jeffrey Wright), how they would outsmart and outfight to survive. But there's more than meets the eye. The story, laced with political and socioeconomic undertones and complex entanglements, makes you care about the characters and their plight.

“The Hunger Games: Catching Fire” immerses you in this make-believe world, yet it will feel strangely real. The 2.5 hours of running time flies and you don't realize the film is about to conclude. The cliffhanger ending is unavoidable for a middle installment.

“The Hunger Games: Catching Fire” scorches and blazes a trail for the next intriguing chapter, “Mockingjay.”

Posted by The MovieMaven at 1:25 PM