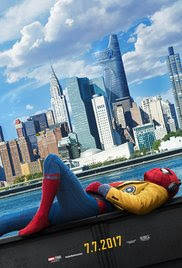 Marvel finally comes swinging with the web-slinger as one of its newest superheroes.  After his exuberant introduction in "Captain America: Civil War" last year, Tom Holland's ("The Impossible") Spider-Man arrives at your friendly neighborhood theaters.   With "Wonder Woman" out of the way, "Spider-Man: Homecoming" is expected to cast a far-reaching web to become one of the biggest box office hits this summer.

How would you top a scene-stealing role in a mega ensemble of superheroes movie?  By going small in scope.  With a youthful spirit and similar vibe to "Ant-Man," the movie feels dissimilar to most Marvel movies, yet it's clearly Marvel's, especially with the appearance of Tony Stark/Iron-Man (Robert Downey, Jr., "The Judge") and a virtual cameo of another acclaimed Avenger.

We meet Peter back in his hometown, Queens, NY.  A high school student, he is juggling homework, tests, girl crush, homecoming dance, debate team and detention.  The smallest detail makes things real, like having to ask Aunt May (Marisa Tomei, "The Ides of March") to buy another backpack since his has gone missing from the alley where he left it so that he could engage in his crime-fighting extracurricular activity.

Mostly handling petty misdeeds, Peter eagerly awaits his next mission with the superheroes league.  Tony is not so keen though.  'Don't call us, we'll call you,' sums up the instruction he gives to his young protege.  Although he does gift Peter a Spider-Man suit, upgraded with high-tech features, which lead to some amusing scenes.

Not willing to stay back, Peter pursues a trail of a more dangerous crime, which puts him as a target of Adrian Toomes/Vulture (Michael Keaton; "The Founder," "Spotlight").  Vulture is an ordinary guy who turns into an illicit life in order to provide for his family.  He and his crew were pushed out by the Department of Damage Control from cleaning up the aftermath of the alien invasion showdown with the Avengers.  He managed to salvage some of the Chitauri technology, which he uses to develop weapons for sale in the black market, in addition to equipping himself with a weaponized wing suit.

The action set pieces are thrilling.  The movie picks up the pace with the Washington Monument incident, a standout especially in 3-D.  Spider-Man breathlessly scales the full height of the monument, creates a momentum high up in the air to crash into the glass window in order to catch a falling elevator.  Webbing the split-in-half Staten Island ferry is another.  And affixing himself to an invisible jet while fighting off Vulture.  The most tense moment with Vulture cleverly occurs on the ground, however.  In a single, seemingly innocuous exchange in a car.

"Spider-Man: Homecoming" is more about Peter Parker than Spider-Man.  Unlike Tobey Maguire ("Pawn Sacrifice") and Andrew Garfield ("The Social Network"), Holland was in the last of his teen years when the movie was filmed and he really does look like a high school teenager.  Absent is the angst of his predecessors, but Peter is unmistakably a total nerd, awkward with a goofy charm.  Marvel wisely skips showing the radioactive spider bite origin and heaviness of  the death of Uncle Ben, making this a different take, keeping it light and fizzy.  Yet, the movie still manages to sneak a couple of twists.

After five Spider-Man movies from Sony, it's quite a homecoming.  "Spider-Man: Homecoming" is fresh, fun and fantastic.